Ralph was always deeply concerned about the dangers inherent in a humanitarian organization that also provides recipients with cultural content and opportunities for learning.

He was acutely aware that the provision of humanitarian aid requires intercultural negotiations: discussions between, on one side, the aid organization that comes from outside of the local culture of the indigenous populations being assisted, and, on the other side, representatives of those local populations—that is, the community.

These discussions and the negotiations that follow them were particularly relevant to the "community building" that is such an important part of JDC's mission globally.

Ralph always expressed the vitality of working as a community. When it came to offering aid in foreign places, he believed in the importance of involving the locals and working as a team for the greater good.

For Jewish communal workers...
No single person, no single organization, can do the job all by itself; it's impossible. When the staff people come around and they do community work, I always say to them 'Mi samech?' Who appointed you to do that work? You should have been appointed not by JDC to help but but by the local community. But people work with community, come into community, they have to prove to their bosses they're doing something and actually what they have to do is not do something but to have somebody else do it. The local community has to do the job. You have to help them, you can't do it for them. So the ultimate goal of what we do anywhere in the world is this person has to help himself. Our business is to go out of business not to be in business. I've been on selection committees, you know for people who were going to work for us. After I selected them I would say, 'Have you found a successor?' The job is really not your job. The job is for you to do. If the job is really important, if the work is really important, you better think of who is going to be your successor. 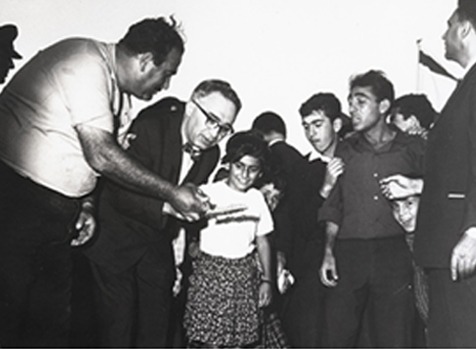 Ralph felt that any attempt at "community building" without regard to local culture would ultimately fail to alleviate problems germane to the local conditions. He also felt that disregarding local culture and values in another country was intrinsically wrong: it meant that the "helper" would be taking a patronizing attitude toward those receiving the assistance. Ralph had deep respect for the community's role in governing itself, and for the community leaders responsible for the governance of the community.
Ralph was acutely aware of the dilemma here: On one hand, JDC possessed the expertise borne of many years' experience in community building, and so it could offer that expertise to communities through the vehicle of a Jewish Community Center—a JCC. However, offering a community a JCC "on a silver platter," while accomplishing an important goal and demonstrating fiduciary responsibility to JDC's donors, would violate the important principles of partnership and of grass roots community action on its own behalf. 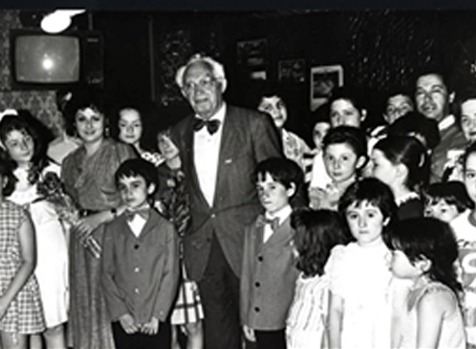 Ralph lived this dilemma without losing sight of his essential principle: the necessity for real involvement of the community in its own affairs, with JDC acting, at some level, as an advisor and provider of expertise. Ralph elucidated his thinking on this by way of an unusual interpretation of a well-known biblical incident. In Chapter Two of Exodus, the young Moses, having grown up in the palace of the Pharaoh, goes out into the Egyptian world and sees two Hebrews fighting.
He asks the aggressor: "Why do you strike your kinsman?" The antagonist replies bluntly: "Mi samecha (who placed you) as a ruler and a judge over us?" 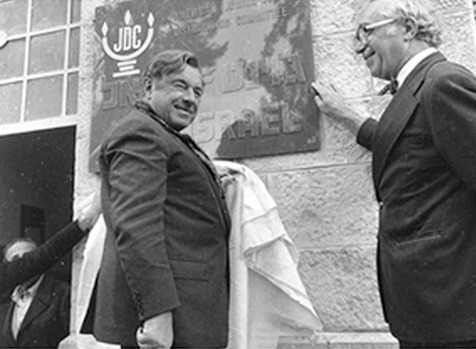 Although Ralph saw why this bitter response is generally taken to be negative, he found it a legitimate question in cross-cultural relations between a community and those who have come to assist it.
"The locals can always ask, 'mi samecha,'" Ralph said, using the Hebrew for "who appointed you," and went on to explain how it is more than appropriate for community leaders to question and suspect those who have come from the "outside," bringing help which may well compromise their indigenous lifestyle, cultural assumptions, and their duly appointed leaders.
"JDC must never be seen, in the long run, as the owner and operator of any programs—JDC represents the Jewish world and, as such, will give aid and assistance to the local communities, but always with the clear intent and purpose of handing over the operation of programs to the communities themselves. This is a sound approach psychologically, operationally, and organizationally."
Ralph told a fascinating story that illustrates his insistence, not only on the cultural competence of an aid organization, but also on acting upon the information gained in pursuit of that competence. 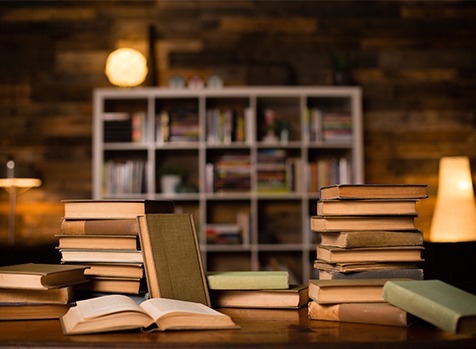 In the early 1990s, after JDC had re-entered the former Soviet Union, one of the major projects that Ralph spearheaded was the establishment of Jewish libraries.
JDC had shipped tens of thousands of Jewish books into the FSU, but they needed a home. One idea was to have libraries also function as Jewish communal cultural center and to train librarians as their directors.But Ralph knew that however JDC decided to establish the libraries, there must be one fundamental guideline: the libraries were to be turned over to and run by the local Jewish community as quickly as possible. 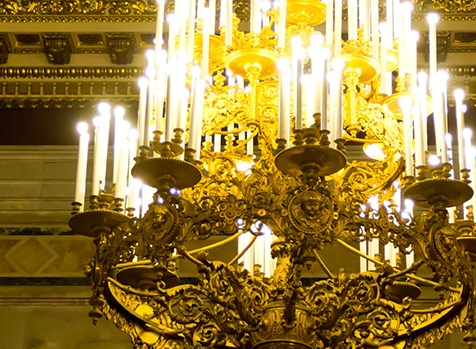 During the discussions about establishing the libraries, however, the local community representatives made what seemed like a strange request. They said that all light fixtures in the libraries must be gilded, a far more expensive style of fixture.
The initial reactions by some of the JDC representatives was, understandably, quite negative. The libraries, they retorted, were to house the thousands of books that JDC had shipped in and to act as communal cultural centers for the renewed interest in Jewish life and Jewish culture.
What did it matter what kind of light fixtures they had, as long as they gave enough light for reading?Ralph said, "I saw that the Russian Jews to whom we were speaking were both adamant about this and disappointed that we didn't seem to understand. After some research, I began to understand a Russian cultural fact: all libraries in Russia had gilded light fixtures. I didn't know exactly why, or what it was in Russian history or the Russian cultural experience that made this necessary, or from what period it emanated. But—and here, perhaps, is that defining moment—I realized that it did not matter.
If the locals wanted gilded lighting because that is what defined a library in the former Soviet Union, then gilded lighting they would get! I needed to convince the decision-makers how important it was to listen to the needs of the local community, because we were talking about their program, not ours." 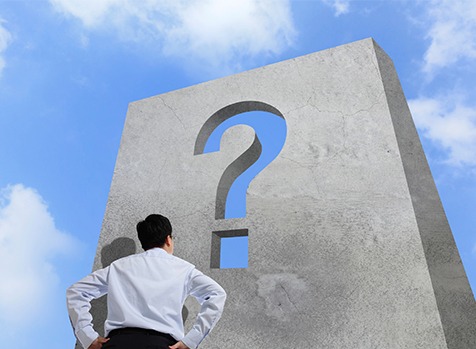 s a result, the first Jewish libraries set up in the former Soviet Union had gilded light fixtures, and JDC learned an important lesson about empowering the local community.
According to Ralph Goldman's vision, Jewish culture and Jewish identity remain inseparable from Jewish organizational life; one of the primary purposes of Jewish communal and organizational life, in his opinion, was to promote Jewish culture and a connection to the Jewish People.
While he prioritized humanitarian aid to Jewish People in need, he also felt that this aid must always be coupled with the teaching of Jewish culture and helping the community members to establish a strong connection to the Jewish People as a whole—with the study of the Hebrew language as an important component of this effort; the rebuilding of Jewish communities around the world must be based upon these ingredients.
"Jewish education must be a fundamental objective of JDC...If not, there will eventually be no Jewish communities, because a Jewish community is defined by Jewish culture."

There is a very beautiful Midrash that compares two sites in Jewish history —Jerusalem and Sinai—and wonders why Sinai is not embedded in Jewish tradition and practice the way Jerusalem is. We know that Jerusalem appears repeatedly in Jewish life.

The liturgy is rife with references to it, and we are bidden to pray for its welfare. Its destruction is remembered under every wedding chuppah. The Yom Kippur liturgy and the Seder both end with an expression of hope that next year celebrations and commemorations will be in Jerusalem.
Fast days remind us of the traumas of Jerusalem. However, Sinai is where, according to Jewish tradition, the Jewish People received the Torah, the collection of lore and law that was the basis for Jewish Peoplehood.

At Sinai the exodus from Egypt became complete. The ragtag collection of former slaves now had an official national narrative, a history that united each one of them, and a code of conduct that set them apart from others — A basis for a common Jewish identity was established.
This was an event of enormous consequence for Jewish history, and dare one say, even for world history.
So why, asks the Midrash, is Sinai not remembered in a similar way? The Midrash gives an answer that serves as a fitting introduction to any article about Ralph Goldman. It declares that although both Jerusalem and Sinai have played major roles in the past, only Jerusalem, which according to tradition is the place from which the Messiah will come, is pointed to the future.

The lesson: Although it is important to mark and celebrate that which was, it is far more important to take note of what will be. To rest on laurels because something was once great, and to assume that one-time greatness bestows a value through the generations, is misleading.
It is rather potential that determines greatness. Ralph, with his incredible list of achievements, could easily have rested on his laurels. Instead, his focus was always on what yet is to be achieved. The push to constantly reexamine, to ask the critical questions even if the answers may be painful, the desire to set goals and then to reset them, and never to consider the challenge complete — therein lies his appeal and his greatness.

Ralph's approach was translated into practice by the JDC in one aspect of its work in the former Soviet Union. The enterprise is broadly categorized as Jewish renewal; the specific aspect under consideration is the effort to create Jewish Community Centers as the flagship for this program.
Looking at Ralph's work in this area will shed a bit of light on the "Torah" of Ralph on community development and the role of the professional in the process.
When JDC first reentered the USSR in the late 1980s under Ralph's leadership, it declared its goal as that of "Judaizing" the Jews. To put it another way, the goal became to reclaim Jews for the Jewish People; that is, to find ways to entice hundreds of thousands of Jews who had been profoundly alienated from the Jewish People, many for several generations, back into the Jewish fold. This was to be an unprecedented effort.
There was no formal Jewish schooling, no active Jewish institutions to speak of, little Jewish organizational life.

It was into this setting that Ralph propelled the JDC forward, with the notion that there can be such a thing as a "post-assimilationist" Jewish community. For the Jewish communal professional, this was the first lesson.
From the early stages of the enterprise, Ralph pushed to establish Jewish Community Centers (JCCs). One must appreciate how far-fetched this effort seemed at the time.
There were no facilities to house these institutions, there were no professionals to staff them, and no one could be sure that even if they existed, anyone would come.